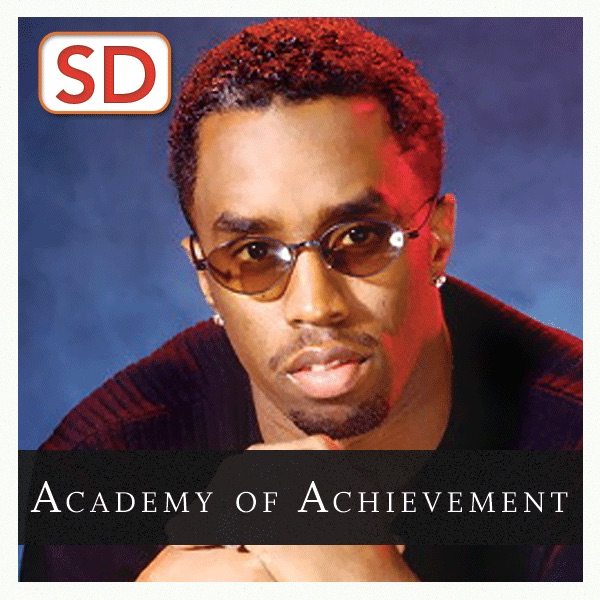 Sean John Combs, also known by his stage name, Diddy (formerly Puff Daddy or P. Diddy), is an American rapper, singer, record producer and record company executive. Combs was born in Harlem, New York. His father, who had underworld ties, was shot to death when Sean was only three. The rest of the family remained in Harlem until Sean was 11. Sean Combs attended a private Catholic school, Mount St. Michael Academy, in Mount Vernon, New York, where he played football and acquired the nicknames "Puffy," and "Puff Daddy." While attending Howard University in Washington, D.C., Combs enjoyed is first success as a party promoter and landed an internship at New York's Uptown Records. Soon, Combs dropped out of school to work at Uptown full time, where he discovered and recorded the singer Mary J. Blige. In 1993, he founded his own label, Bad Boy Records, producing major rap artists such as Biggie Smalls, AKA the Notorious B.I.G. Combs has also produced hit songs for a variety of artists, including Usher, Li'l Kim, Mariah Carey, Boys II Men and Aretha Franklin. In 1997, he made his recording debut as a rapper. His first album, No Way Out, went to Number 1 on the record charts and won a 1998 Grammy Award for Best Rap Album of the Year. The same year, he spoke at the Academy of Achievement Summit in Jackson Hole, Wyoming. In this podcast, he is heard participating in a panel discussion, "Thinking Outside the Box." In his remarks, he describes how he first became interested in both business and music as a child. Since his appearance at the Academy of Achievement, his business interests have continued to grow. In addition to his record label, his company, Bad Boy Entertainment Worldwide, now includes the clothing lines "Sean John" and "Sean by Sean Combs," as well as restaurants and a movie production company. He has also enjoyed success as an actor in motion pictures and in the Broadway revival of Raisin in the Sun. His varied business and creative ventures have made him the wealthiest and most influential figure in the world of hip-hop music and fashion.

Coach Be: Daily
Coach Be Moore