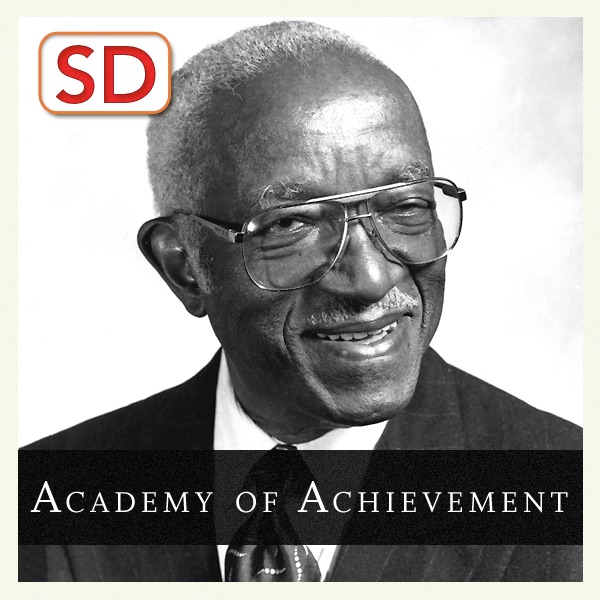 John Hope Franklin (1915 - 2009) was a distinguished American historian. Author of more than dozen books, he is best known for his definitive history of the African American experience, From Slavery to Freedom. He was born in Rentiesville, Oklahoma, the son of an attorney and a schoolteacher. He earned his undergraduate degree at Fisk University in Nashville, where he found a mentor in Professor Theodore Currier, who provided a generous loan to pursue his doctorate at Harvard, a story Professor Franklin clarifies at the beginning of this podcast. At the time, standard texts on American history typically neglected or minimized the contributions of African Americans. "My challenge," Franklin said, "was to weave into the fabric of American history enough of the presence of blacks so that the story of the United States could be told adequately and fairly." In 1947, John Hope Franklin balanced this account with his magisterial history of African Africans, From Slavery to Freedom, a work he revised and updated throughout his life. In the 1950s he was a member of the NAACP Legal Defense Fund team, preparing the arguments that would eventually prevail in Brown v. Board of Education, the historic Supreme Court decision that would ultimately bring an end to legally enforced racial segregation in America. In an academic career lasting over four decades, he chaired the history departments at Brooklyn College and the University of Chicago and was the James B. Duke Professor of History at Duke University, and Professor of Legal History in the university's law school. In 1995, he was awarded the Presidential Medal of Freedom, the nation's highest civilian honor. Ten years later, at age 90, he published his autobiography, Mirror to America. This podcast was recorded at the Academy of Achievement's 1996 Summit in Sun Valley, Idaho, where Professor Franklin tells the story of his lifelong struggle against discrimination.