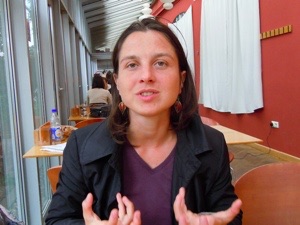 IRENA TOMAŽIN (text by: Luka Zagoričnik)Dancer, choreographer, performer, actress, philosopher, and vocalist Irena Tomažin made her first appearance in the area of music with the group Kapricjoke, which appeared also in the Concert Marathon organised by Radio Student. However, her most noteworthy debut presentation in the field of sound was made with a solo recital iT for voice and voice recorders, in which Tomažin ingeniously weaves the story through the primary human instrument – the voice. Hers is not a trained voice based on clear articulation and technical brilliance. Quite the contrary, its power of expression draws precisely from the failure of articulation, from its incessant attempts to constitute itself, with which it often drifts away from the field of meaning and enters the field of sound. We are dealing thus with a fragile voice, a voice in search of itself, which nevertheless has a profuse emotional and expressive potential. At the same time, it is also an alienated voice, which is – since it is recorded on dictaphones – becoming an acousmatic object, alienated from corporeality, but which is re-entering the semantically structured storyline through repetitions of sound loops and tape manipulation. Voice, a fundamental corporeal experience, is traversed by countless voices, multiplying, dissolving, and confronting their own semantic and sound resonances in space. To dramaturgically round up her (sound) narration, Irena Tomažin artfully, sometimes movingly, and sometimes playfully, employs different means: from adopting and breaking the tunes from the sphere of popular music, theatrical story-telling to playing with the words’ syllables and their rhythm, dismantling the words in the style of literary modernisms and avantgardisms of the previous century, or reducing the voice to panting, smacking, sighing. However, in so doing she is still allowing multiple voices to speak at the same time, in harmonies and cacophonies. Although her creativity can be compared to certain more visible contemporaries (such as Meredith Monk, for example), Tomažin’s performance is unique in its child-like playfulness, which is occasionally also capable of sparkly self-reflection. Although her performance ever-so-slightly implied a rather schizophrenic story of submission, which addressed the audience through multiple voices simultaneously, these voices nevertheless incessantly communicated in the in-between space of the word and condensed meaning. Recently, appearing as iT, Tomažin’s voice is dissolving from a structured and distorted one, from veiled polyphony, to a naked voice, which is ultimately left almost voiceless, residually remaining in the body, where the possibilities and the impossibility of its articulation are taken over by gesture, movement. As iT, Irena Tomažin as a matter of fact thinks voice through heterogeneous trains of thought, which intensely, via extremely personal experience, traverse one another. This discloses her experience as a philosopher who confronts her thought with other thinkers of the voice, such as, for example, Mladen Dolar or Jacques Derrida, or literature, such as, the literary thought of Samuel Beckett, or the thinking of Antonin Artaud on contemporary theatre, or the melodies of most diverse traditions. As iT, Irena Tomažin performs at home and abroad, also in important international festivals, such as Club 5 in Vienna, Dispatch in Belgrade, Densités in France, and Ultrahang in Budapest. In recent years, she has also lent her voice to free improvised music, collaborating with numerous home and foreign makers. These include the bassist Tomaž Grom, the multitalented musician Andrej Fon, the saxophonist Marko Karlovčec, and others. With the latter she also released a record ‘That Which Happens Is Itself Dripping Red’. Internationally, she is collaborating with the American brass musician Liz Allbee, the Japanese percussionist Seijiro Murayama, and others. As a dancer and performer, Tomažin collab