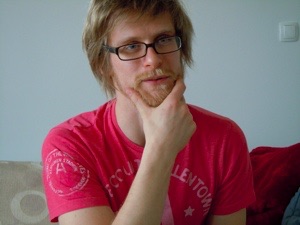 Vasja Progar - (text by Luka Zagoričnik)Born in 86, Vasja Progar is one of the youngest makers in the field of contemporary music in Slovenia, an insightful and critical thinker, a graduate of biotechnology and a former student of composition and music theory under Uroš Rojko at the Academy of Music in Ljubljana, whose radicality and faithfulness to his own expression made him quit this institution to embark on a study of cognitive systems and interactive media at the University Pompeu Fabra in Barcelona. This compact sentence only neatly discloses Progar’s creativity in the area of music. Young as he is, Progar already presented his compositions in the Slovenian Philharmonic in the frame of the festival Slowind in 2009 and at the Slovene Music Days in the year 2010. His transition from the 2008 composition for choir ‘Ay, Green Are All the Highlands’, a remake of the Slovene folk song, to his later works is abrupt, incorporating and illustrating the tendencies of certain other young Slovene composers, Progar’s colleagues, Matej Bonino and Petra Strahovnik for example, with whom Progar collaborated in the intermedia performance for chamber ensemble, a dancer/singer, live electronics, and video, meaningfully titled ‘Futturismo Hurra!!’, which in its core paid tribute to the historical movement of futurism via the futurist poem of the same title by Luciano Folgore. The intermedia nature of the work, which combines dance, movement, environmental and electronic sounds, and sounds of acoustic instruments, reveals the tendencies of the three young artists, who used to organise discussions, round tables, workshops, and other gatherings together with their colleagues from Škuc Gallery, with which they were boldly breaking down the stuck-up and conservative ways of thinking that overwhelmingly prevail in Slovene classical music. Vasja Progar goes farthest among his colleagues. His 2009 composition ‘Close to Silence’, performed by the acclaimed Slovene contemporary wind ensemble Slowind, is anchored in the current reflections on silence, which are – following John Cage – unwinding in contemporary music for the past twenty years. In this four-part composition, Progar constitutes silence through different perceptions: as a resonance, as latent energy, as absence in relation to sound, as tension and abstraction in relation to music. Which can also be non-music, a reflection, bound to the listener and his/her perception. And it is precisely here that Progar touches upon his idea, which he presents as ‘a focus on research and an unveiling of human perception through art form’. Today, Progar enacts this idea, this search in numerous art environments, besides the music and sound ones, also in multimedia and interactive performances. These include video artists, dancers, and poets, as for example in collaborations with Spanish, Chinese, Japanese, and Lebanese poets presented at the Ljubljana-based festival Live Literature in the years 2009 and 2010. Progar has opened up the thresholds of our perception and the senses even more in his interactive installation ‘Threshold’, where he – negotiating the limits of our perception – researches and reveals the boundary lines between perception and interpretation, pursuing an interpretation that is pushed into the elusive sphere of the illogical by the working of the installation itself. In his work ‘Sub / Consciousness’, Progar investigates the space between the conscious and the unconscious by using different audiovisual stimulants, which take the form of pre-prepared sound textures, measurements of the heartbeat rate or body’s blood pressure, and other visual stimuli mediated by the video by Ana Čigon and Rot Pulojva. These are then submitted to further sound manipulation and positioned into the space of the conscious and the unconscious, into a space through which we enter and exit the real and the virtual. The piece was presented at the exhibition and series of sound events, installations, and perf