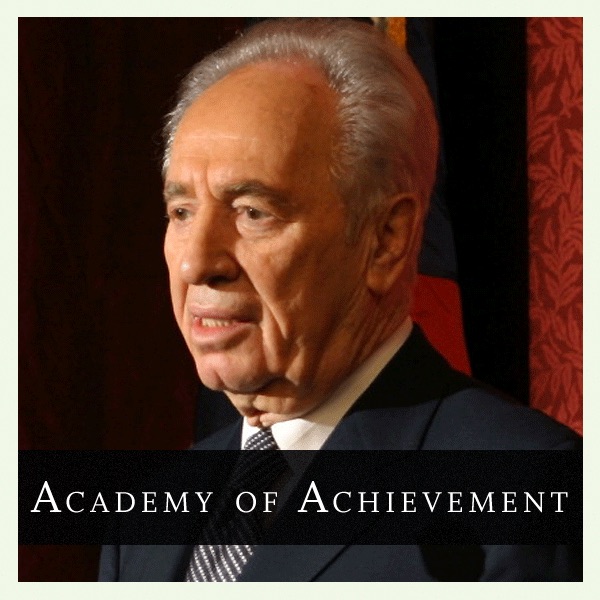 "When you win a war, your people are united and applaud you. When you make peace, your people are doubtful and resentful." For more than half a century, Shimon Peres has served the State of Israel and the cause of peace with a courage and determination born of intimate familiarity with the horrors of war. He served in the defense forces at the founding of the State of Israel, heading the Navy at age 25; at 29 he was Director-General of the Ministry of Defense. Over the course of a 48-year career in Israel's parliament, the Knesset, he has held every major cabinet post and served as Prime Minister in some of Israel's darkest hours. He first served as Prime Minister in 1977, after the resignation of Yitzhak Rabin. In 1984, he headed a National Unity government that put an end to a ruinous inflation, and extricated Israel from a tortuous military involvement in Lebanon. As Foreign Minister he initiated the negotiations that led to the Oslo Accords with the Palestine Liberation Organization, and completed a long-sought peace treaty with Jordan. In 1994, he shared the Nobel Price for Peace with Yasser Arafat and Prime Minister Yitzhak Rabin. Upon Rabin's assassination, Shimon Peres became Prime Minister once again, serving simultaneously as Minister of Defense. He later served once again as Foreign Minister in a government of National Unity. For many years he endured criticism, even within his own Labor Party, for his zealous pursuit of peace, but his determination never wavered. He has always placed the welfare of the nation as a whole ahead of partisan interest. At the age of 82, after serving another term as Party Chairman, he left the Labor Party to support a new centrist formation committed to a negotiated peace with the Palestinians. In June 2007, he was elected to serve as the ninth President of Israel, the country's official Head of State. He is the first former Prime Minister to attain the Presidency of Israel, but long before winning this honor, Shimon Peres had won a place in history as one of his country's greatest statesmen and one of the world's great champions of the cause of peace.