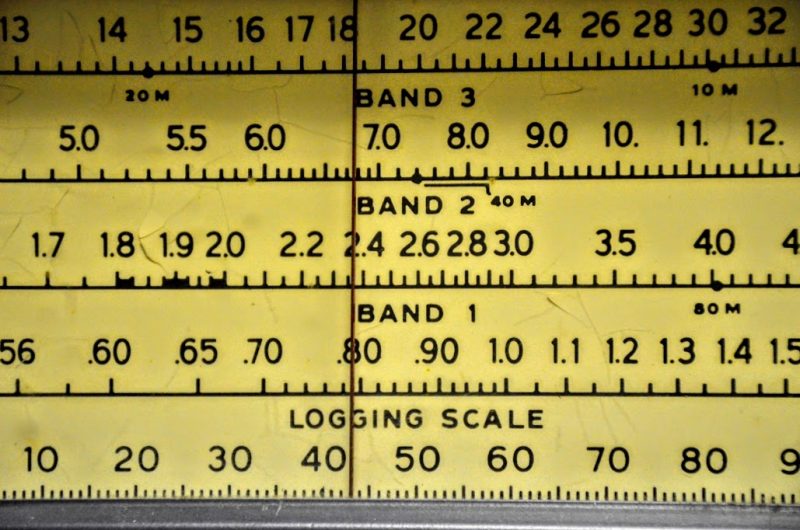 The most active period of numbers stations monitoring began in 1980s as in efforts by “Havana Moon” or William (Bill) Thomas Godbey, Simon Mason and writers and editors of the “Monitoring Times” journal. Our site has studied numbers stations monitoring in 1980s. The great activity of numbers stations DX and monitoring lead to creation of online based groups like Enigma and Numbers and Oddities in early 1990s. However, number stations did not appear in 1980s, they been around since at least 1914. In their oldest simple form they started as Morse code transmissions, then live voice readings and finally automated voice transmissions, not stopping there yet as digital mode transmissions also hides numbers groups within.

The period before 1980s,1950s and 1960s were very active in terms of espionage. Many declassified documents tell us about CIA and SIS operations in Baltic States, Soviet Union and Eastern Europe and elsewhere using Morse code messages. Then there is a case of Operation SOLO of FBI infiltration in the American Communist Party and Soviet secret service, where numbers transmissions from the Soviet Union were involved.

Numbers stations were in the air and there were people listening to them. So this brings to the subject of this article: a authentic tape recording of several transmissions of Spanish language Five Digit numbers station recorded in 1966.

The recording was made by Don Hibschweiler, who is currently a morning radio host on 90.1 WFYI Public Radio.

As Don describes “the broadcasts were daily at 1700 EST on 6.805 Mhz. The recording was made on July 20, 1966 at my listening post in West Central Indiana. There are Spanish numbers in groups of five.  He always slowed down during the last set of numbers and then says something like, “Toonigh, toonigh”. I also heard one broadcast where the announcer made a mistake.  The broadcast was repeated later with the same mistake and a weaker signal.  I thought this meant the second broadcast was a recording of the first or both were recorded ahead of time.  Also, the difference in signal strength may indicate the use of a directional antenna and/or a different transmitter power.”.

What we have here is a recording of supposedly male voice Spanish language numbers station. The technical issues and specifics of the broadcasts may point to Cuba. Cubans in 1980s to early 2010s used voiced five figure stations with characteristic“Atencion” at the start of the broadcast. This is was known as V02 and V02a before moving on to hybrid digital and voice station HM01  This station however has no such prefixes. It could be old predecessor to Antencion station. CIA was caught using four figure numbers station in Spanish language, so CIA involvement  also cannot be ruled out.

Mr Don Hibschweiler came across this station after reading an article on “Electronics Illustrated” 1966 May issue.

The article is called “How to eavesdrop on real spies” featured real use of numbers stations and radio signal announcements as of case of Bay of Pigs invasion and the Rudolf Abel the Russian spy. It also featured some of the frequencies used by the numbers stations back then and the time of broadcast. Thanks to this journal Don was able to tune into this Spanish language number station. 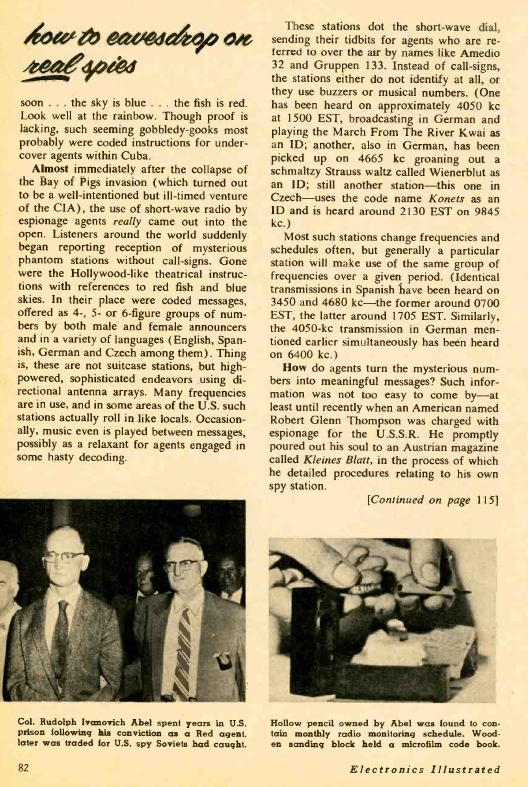 The article points to various other numbers stations used in 1966. The German language station peculiarly plays “The March of the River Kwai” and classical music piece by Strauss as its interval signal. Such station has not been heard and any recording of such would be welcomed.

In the 1960s the first automatic voice machines were developed. In the decade they spread also to Eastern Block. Automated voice creation improved numbers stations as the errors made during live reading were common. Cuba also eventually started using automatic voice transmissions, but this 1966 recording still indicates live or pre-recorded broadcast.

This recorded Spanish language numbers station as for now stands unidentified until new documents pointing to it are found. This is one of the oldest recording of a number station publicly available and stands as important radio history source.

Many thanks to Numbers Station Research and Information Center and Don Hibschweiller for allowing us to republish this article and share this excellent recording.